Looking at the Sunday School History and its beginnings gives us an indication of how churches today, have moved away from its original purpose. 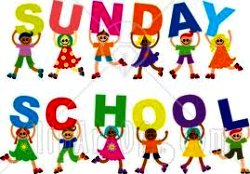 Take a look at the origin of Sunday Schools....

It all began in the 18th Century in Britain, United Kingdom.

Sunday Schools were places where poor children could learn to read and write using the Bible as their text. Children in those days (The Industrial Revolution) spent all week long working in factories just to earn a living. Sunday was the only time for them to gain some basic literacy education alongside religious instruction.

The movement soon spread to America and Sunday Schools became extremely popular as this was the only opportunity for working families to receive an education.

Inculcating Christian morality and virtues was another goal of the movement. It was also through this form of education that kids were encouraged to stay off the streets and out of troubles.

Sunday school pupils often graduated to become Sunday school teachers, thereby gaining an experience of leadership not to be found elsewhere. Even some Marxist historians have credited 19th-century Sunday Schools with empowering the working classes.

100 yrs later, compulsory state education was introduced in Britain and America. So reading and writing were learned on weekdays at school. Then Sunday School History began to shift as Sunday School curriculum was limited to religious education. Nevertheless, many parents continued to believe that regular Sunday school attendance was an essential component of childhood.

However, the trend for permissive parenting in the 1960s caused another change in Sunday School attendance as children decided to drop out of the Sunday Schools, especially if their parents are not church goers.

By the 19th - 20th Century there was an almost unbelievable increase in weekend leisure, much of it at the expense of Sabbath rest. Christians were off at the lake or on to the mountains for vacations. Church attendance was neglected. Sunday school was an almost untransportable institution. Television culture did not include Sunday-school-going in its norms and projections, as prime time children's program compete with Sunday School hours.

With pop culture of TV, sports and recreation bombarding wavering Christians, church attendance in the West dwindled, thus affecting the Sunday School, which by now comprised of few Christian kids.

Sunday School is no longer a means for education. With the dwindling of faith and passion for God, Sunday School has lost its fervour for a religious life and has been reduced to Bible Stories and moral education.
Sunday School teachers are using the Bible as a moral text to teach goodwill and character; of love and forgiveness , of courage and strength, .... often leaving out the most important element of the Christian Faith - Salvation through Jesus. Some growing churches who embraced the call to Christian education continue to uphold the vision of reaching out.

Sunday School History is not so in the Eastern Continents - Asia and Africa. Missionaries had planted churches in the 1900s, and left to the indigenous people, churches have grown and is still growing today in the 21st Century. Sunday Schools expands beyond children and have included adults - often known as Adult Bible Classes. Some evangelical churches would use this time to embrace non-Christians who are willing to explore the Bible. The Sunday School Curriculum moves into the weekday night classes known as Elective Courses where topical Biblical subjects are taught and discussed.

Some Questions to ask today

How is your Sunday School ?
Is it growing and in tune with God's will - to make disciples. ... and to study and be approved.... ?

Is your Sunday School a time for child care and moral education while the adults are in the service ?

How is your Sunday School curriculum embracing non-Christians

Take a hard look at the curriculum - Is it moral education or teachings on Faith ?

What will your Sunday School History look like 20 to 50 years down the road?

You can make the difference !

You can chart the Sunday School History of tomorrow !

So, keep in steps with the Spirit

Back to Childrens Church for more Bible Crafts and Activities

Before you leave, Go to Forum Page to share your experiences and ideas