Why not Sad Friday ?

Good Friday, also called Holy Friday, Great Friday or Black Friday, is the Friday preceding Easter Sunday. It is usually celebrated by Christians who commemorate the crucifixion of Jesus Christ and His resurrection on Easter Day.

During this holy week, many preschool curriculum would include more than just Easter crafts but also preschool crafts on the crucifixion of Jesus, the empty tomb and Jesus praying at the Garden of Gethsamane. This is a significant event for Sunday schools to engage in story telling, projects and crafts to help kids remember the death of Christ that leads to His resurrection on Easter Day.

Why and how did Jesus die?
Why was it called "Good Friday" when Jesus died ?
Yea, Shouldn't it be called "Sad Friday" ?

That's a good question.
And I have just the right story for you.
Maybe we will find the answer at the end of the story.

Here's the story of Good Friday

Jesus called out with a loud voice. (Don't make it sound too scary)
"Father, into your hands I commit my spirit.
After saying this, he died. (moment of silence)

A Roman guard, seeing what had happened, praised God and said,
"Surely this was the Son of God."
Some people believed but some went away angry but many were fearful,
including Jesus' followers.

There was a rich man named Joseph.
He asked to take Jesus' body, so he could bury Jesus in his new tomb.
Long ago, dead people were wrapped up in a long piece of cloth
and placed in a cave-like tomb.
The wrapped up dead body is called "mummy" (show picture of mummy)

Some of the religious leaders who didn't like Jesus remembered that
Jesus had said that He would rise from the dead.
They were afraid that it would come true so they persuaded the governor
to seal the tomb and station many Roman guards.
They want to ensure that Jesus would not disappear from the tomb,
even though Joseph had already rolled a big stone to cover the entrance.

At dawn the next day, some women went to look at the tomb
but they could not find Jesus.
Jesus was gone from the tomb.
Where did He go?
Who took Jesus away ?

Nobody took Jesus away.
Jesus was dead but He rose from the dead.
He resurrected.

So it came true.
Jesus had said that He would die
and on the third day would rise from the dead.

Is that why we say "Good Friday" when Jesus died instead of "Sad Friday"?
Yes, and more than that.
Jesus did not die just because the people killed him.
What do you mean?
He actually planned to die.
Why?
"God so loved the world that He sent His only Son, Jesus,
that whoever believes in Him will live forever.
Wow, that's cool. I want to live forever.

It was Good Friday. Mary was crying because she was very sad.

Jesus was her Lord and God. But Jesus has just died.

Why did Jesus have to die?

Wasn't Jesus a good man? He healed the sick and made the blind men see. He fed thousands of people. He even brought the dead back to life?

While Mary was pondering, an angel appeared and said, "Woman, why are you crying?

Mary said, "They have taken my Lord away and I don't know where they have put him."

When Mary turned around, Jesus was standing there, but she did not realize that it was Jesus.

Jesus said, "Why are you crying? Who is it you are looking for?"

Mary thought he was the gardener and said,"Sir, if you have carried him away, tell me where you have put him, and I will get him.

Jesus called her by name, "Mary".

Suddenly Mary recognised that it was Jesus her Lord, standing there.

Jesus said, "Go tell my brothers that I am not dead. I have risen just as I have said."

Mary was so happy. She ran as fast as she could to tell the others that Jesus is not dead. He has risen.

That was Easter morning, 3 days after Jesus died.

Why and how did Jesus die? Think about it. Why was it called "Good Friday" when Jesus died ?

Shouldn't it be called "Sad Friday" ? 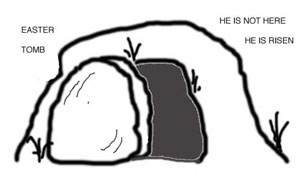